Hot water, soap and shampoo; for most of us this is the start of our day. A shower or bath each morning is a habitual part of modern life that the majority of us couldn’t go without. Since the Victorian era, the British have been obsessed with being clean and the array of products with which we soak, soap and scrub. However, go further back into the Georgian and Stuart reigns and the picture is rather different. Up until the mid-eighteenth century, it was uncommon for people to wash the body with soap and water. The courtier and diarist, John Evelyn, wrote in 1653 that he was resolved to wash, but only once a year.

Rather than a disregard for personal hygiene, this unwillingness to bath was partly for health reasons. Doctors and scientists of the day argued that bathing would allow unclean waters and miasmas to enter the body and upset the equilibrium of the natural humors. On a very practical level, it was also quite a challenge to fill a bath tub in an age when piped water in the home was available only to the privileged few. So instead, cleanliness was achieved by rubbing the body with linen towels, regular changes of underclothes and the liberal application of perfumes and powders in an attempt to mask any unpleasant smells. Unsurprisingly, the result of this cleansing treatment was not always successful. As the courtier Lord Hervey remarked, even social gatherings at the royal palaces resulted in ‘sweating and stinking in abundance’. Being a laundress in the eighteenth century can’t have been a pleasant job!

In contrast to most of her courtiers, Queen Caroline, the wife of George II, had an unusual penchant for washing with soap and water. A lively and intellectual woman, she promoted new ideas about bathing and the body that had begun to develop during the early eighteenth century. In 1724, an English physician could write with confidence that washing the body was beneficial because it freed the pores of sweat, ‘that glutinous foulness’. Shortly after her arrival in England in 1714, Caroline had a bathroom installed in her private apartments at Hampton Court Palace. This had a wooden tub and a supply of cold running water. Hot water had to be bought up the backstairs by the Queen’s Necessary Woman. When Caroline wished to bathe, her tub was lined with linen sheets and fitted with a stool. Once seated in the tub on the stool, the Queen soaped herself down using a scented soap beaten into a small quantity of water in a bowl. Water from the tub was then scooped up and tipped over her from another bowl. All this was done while Caroline wore a bathing dress and cap to cover her head! 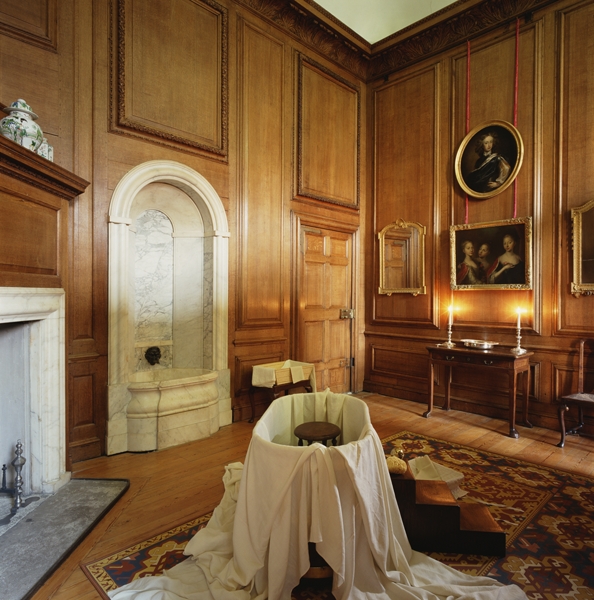 While novel for the time, Queen Caroline’s bathing practices were still very different to our own. Nevertheless, the Queen’s penchant for cleanliness was an important step towards modern attitudes towards soap and water. The Georgian age was the moment when our own fastidious practices of washing the body were born.