George II is far from being the best-known or best-loved of British monarchs, but in 2014, a year that’s full of exhibitions, programmes and events celebrating the Georgian age, he stands at least a chance of being better understood.

Unfortunately, many people have difficulty in distinguishing George II from his father George I.  The best-known pub-quiz-type fact about George II that people might be able to drag from their brains is the detail that he was the last British king to lead his troops in person on the battlefield.

Bad-tempered, full of bluster, fond of music and of fighting, George II struts through Britain’s history books like a kind of tin-pot dictator: brusque, pompous and a little bit ludicrous.  Despite his tantrums, though, he deserves at least a pinch of sympathy.  Like all courtiers, he spent his days performing a part upon a stage.

Unfortunately, for a man of his gaudy tastes in clothing, he was considerably shorter than average.  He had bulging china-blue eyes and his prominent nose was rather Roman.  He also had an imperious temper: ‘vehement, and irritable’, ‘hot, passionate, haughty’.  But his anger could cool as quickly as it came.  He had the great redeeming feature of being passionately in love with his wife, the fat, funny and adorable Princess Caroline.

At the time of his birth in 1683, the possibility that Georg August (a member of the Electoral family of Hanover in Germany) would become king of Britain had seemed almost preposterously small.  But he immigrated to Britain in 1714 when his father became King George I, unexpectedly inheriting the British throne because of the failure of the Stuart line of monarchs.

So Georg August became George, Prince of Wales, when he arrived in London for his new life.

Unfortunately, he had a terrible relationship with his father, and had not seen his mother since he was eleven, when she was locked up in a remote German castle for her adultery.

The pre-existing bad feeling between the new king and prince was further whipped up by the British politicians who’d invited them to take the throne.  The court split into two, and the parties hosted by George as Prince of Wales and his welcoming wife Caroline as princess were far more lively than those hosted by the king.  At the Prince and Princess of Wales’s parties, people had so much fun that ‘some virgins conceived’.

The development, frivolous though it seems, actually represents a step forwards in British politics.  Previously, if you’d disagreed with the king, or his supporters in Parliament, there was little alternative but to take up armed rebellion.  But now, if you disliked the ruling faction, you could go the parties of the Prince of Wales instead.  This would lead to the concept of ‘His Majesty’s Loyal Opposition’.

The feuding between George as Prince of Wales and his father would only really end with the latter’s death in 1727.  George II came to the throne at the age of forty-four, to the sound of Handel’s specially-composed coronation anthem, ‘Zadok the Priest’.  And he attempted, sometimes with bad-tempered poor grace, to continue the business of getting this new German royal family accepted by its subjects.

And despite his own unpleasant experiences with his father, history would repeat itself as George II developed a terrible relationship with his own eldest son, Frederick.  In 1714, the teenage Frederick was left behind in Hanover to be the family’s representative there, and rather grew away from his parents.  His adulthood would see repeated nasty clashes between George II and Frederick, the new Prince of Wales.

George II’s greatest love seems to have been with his troops and their uniforms, and then, with his wife, the brilliant if plump Queen Caroline.  Despite having an official mistress for 25 years, George ultimately preferred his spouse, and mourned deeply after her early death in 1737. This was a low point in his reign, and his personal popularity plummeted too.

But George’s final twenty years would see him taken to the hearts of his people.  He had crushed a Jacobite rebellion in 1745, and in the decades that followed Britain’s successful naval strategy had won her a great empire all around the world.

George II met his end at Kensington Palace in 1760, a heart attack that unfortunately took place while he was using his close stool. This, after the fighting, is perhaps the second-best known fact about him.  But he was a more complex and more successful king than the crude caricature of an angry man might suggest.

Every generation has a story, meet the Glorious Georges this year at Kensington Palace and find out more.

The shows at London Fashion Week are always full of smart historical references, and ... 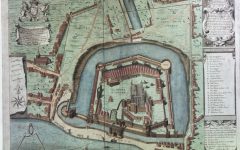 If you visit the Tower of London, you can walk where some of the ...