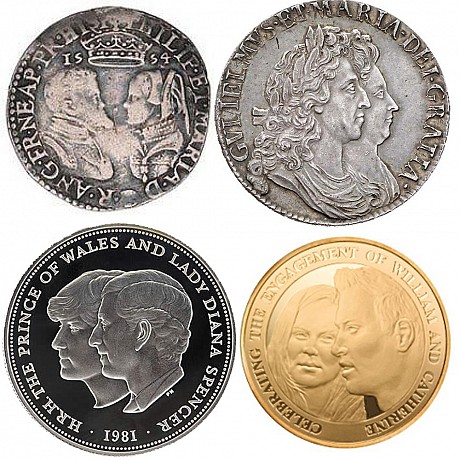 Who’s looking at who? The positions of the royal couples on British coins tell an interesting story about their reigns… The first married couple to feature on English coins were Queen Mary I and Philip of Spain (above, top left).  In view of their equal status to the throne they are shown facing each other.  When joint monarchs King William III and Queen Mary II (above, top right).  were invited to take the throne in 1688, William got precedence over Mary and his face is before hers, despite Mary having being the heir to the throne!  A commemorative coin was made for Charles and Diana’s wedding in 1980 (above, bottom left) and the trend looks set to continue for William and Kate (above, bottom right), although they are given equal status on the coin as befits a modern couple.