Made in striking bright red silk, it is a rare and early example of machine knitting, a new technology that became established in England over the 1600s. The vest, and a pair of green silk stockings that also belonged to the King, were recently examined by knitting experts who concluded that they were of extremely fine quality. This was knitting fit for a King! 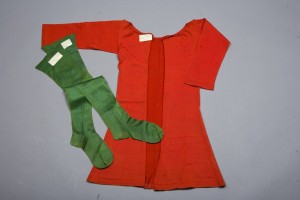 As well as being beautifully made, William’s vest also gives us a rare insight into what the King wore informally when he was relaxing in his bedchamber. In the morning, before William was dressed by his servants, he would have worn a linen shirt decorated with lace and a loose silk gown or robe over the top. During the winter months, he would also have worn the red knitted vest in between the two layers to provide extra warmth in the draughty palaces. William III is generally known as a serious monarch and soldier, but as this item shows he had a taste for very fine and surprisingly vibrant underclothes.