We’re delighted to say that HM Tower of London is poised to finally open its doors to visitors once again on Wednesday 19 May 2021. However, much work has been going on throughout the lockdowns to protect the fabric of the building and the future of the palace. Assistant Curator Alfred Hawkins reveals one of the important projects that he has been working on behind the scenes.

As a self-funded charity, the closure of the palaces during lockdown has had a devastating financial impact on Historic Royal Palaces. Additionally, being unable to share our spaces and stories with you in person over the past year has been saddening. Our work though, as the custodians of six royal palaces, did not stop when the gates closed. Each of the palaces require an extraordinary amount of specialist work to maintain and HM Tower of London, as our oldest palace, is no exception. From the White Tower to the moat, a dedicated team have been hard at work behind the scenes maintaining and conserving the palaces in preparation for your return. As we reach the light at the end of the tunnel, I can think of no better time to share what we have been up to.

One focus of our work during the lockdown has been the walkways leading to and from the Wakefield Tower (or as it is sometimes known – the Torture Tower). The Wakefield Tower itself is a grand example of medieval building prowess, acting as both an extravagant palace and formidable defensive bastion. Built by Henry III between 1220 and 1240, the tower originally sat at the edge of the river Thames and would have been accessible by boat via a postern (a small secondary door) uncovered during excavations in 1957-8.

Following the construction of St. Thomas’s Tower by Edward I, the Wakefield Tower slowly diminished as a royal lodging, becoming a store for official records from the 14th century until the mid-19th century. After the stores were relocated, the tower was altered between 1858 and 1869 by architect Anthony Salvin to exhibit the Crown Jewels, which had previously been held in the Martin Tower.

The jewels were held on the first floor of the tower for security reasons and were accessed by an external staircase and, subsequently, a two-storey building which was built against the northern elevation of the Tower. The walkways with which we were concerned, however, have a far shorter and less illustrious history. They were installed in around 1975 following the demolition of the previous entrance in 1970-1 and the relocation of the Crown Jewels to their current home in the Waterloo Block. While the walkways had been altered in 1995 and 2003, the supporting timber beams had never been replaced and were in a poor condition and needed to be replaced. 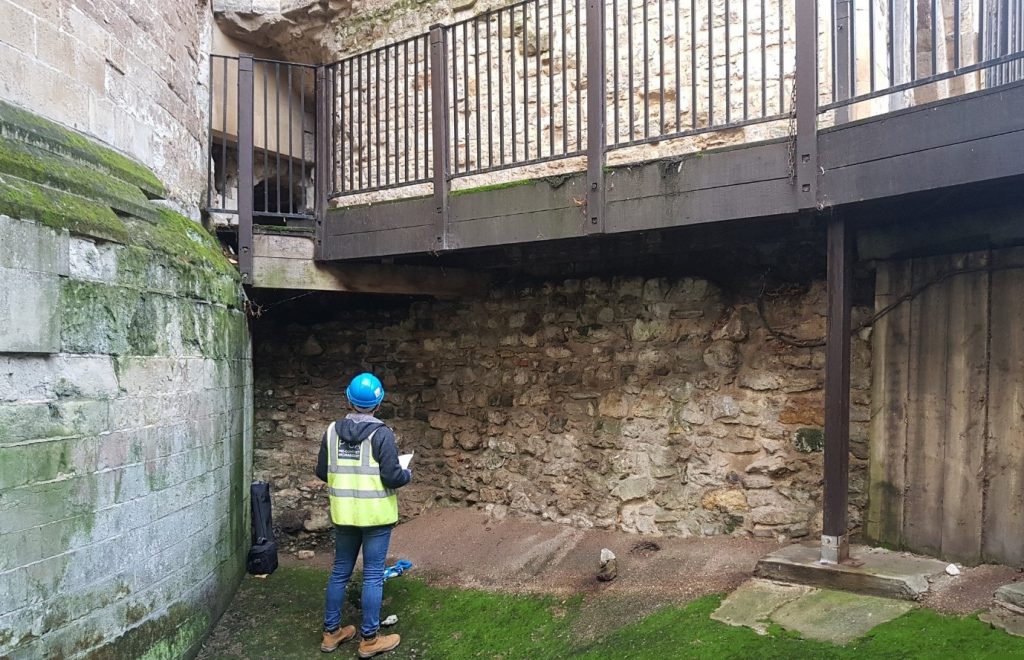 Now, you’ll be glad to hear that this blog isn’t an attempt to convince you of the importance of 1970s timber walkways. That being said, the removal of the walkways presented us with a unique opportunity to access and record parts of the Wakefield and Bloody Tower which would have usually been inaccessible – an opportunity we may not have again for 45 years. This recording, which consisted of a Watching Brief and ‘Stone by Stone’ petrological assessment, was carried out on our behalf by Pre-Construct Archaeology.

Petrology, the study of the formation of rocks, is invaluable to us at the Tower as by observing the microscopic details of a particular stone, alongside how it has been worked, we are able to date any exposed stonework at the fortress (and sometimes even locate the quarry!). This allows us to increase our understanding of the buildings at the Tower and to unravel stories millions of years in the making from the formation, excavation, transport and working of the stones which make up the formidable fortress.

Once the walkways had been removed, the recording process could begin. The first step was to draw the elevations to scale by hand. This drawing was then annotated by a petrologist who assessed each stone individually and took samples in order to ascertain the stone and mortar types, their age and phasing. This leaves an almost undecipherable drawing which forms the basis of our understanding of that particular section of the wall. Finally some computer magic converted those drawings into a scaled digital image accompanied by a report on the stone and mortar types present.

Through this assessment, the elevation shown above can be dated to around the 13th century. It contains a large quantity of Kentish Ragstone, a common building material at the Tower, alongside more unique pieces of Caen stone from Normandy, large quantities of which had been used by William the Conqueror in the construction of the White Tower. Alongside these were a number of re-used worked Roman stones which had almost certainly formed part of the city walls of Londinium almost two thousand years ago. Through combining these results with previous excavations, we can interpret this as a revetment (supporting) wall related to a defensive ditch dug around the Tower during Henry III’s works to expand the fortress.

Recording these previously concealed features helps to increase our understanding of the development of the Tower of London from William the Conqueror’s great keep to the sprawling fortress we know today, but this is by no means their only purpose. One of the most important aspects of the archaeological process is the creation of a ‘permanent record’. They provide us with a safeguard if, touch wood, a section of wall was to collapse and be lost to us forever.

This important work, which helps us to record and understand the secrets of the Tower, can only be undertaken with the support of every member, visitor or donor who allows us, as an independent charity, to fund the continued maintenance of our irreplaceable palaces. So when the drawbridges are lowered and the gates are open, please do pay us a visit – and keep an eye out for the extraordinary features hidden behind the mundane which you have helped to preserve.

And from everyone here at Historic Royal Palaces – Thank you.

It’s June, the summer weather is with us and some lockdown restrictions have finally ...

Kew Palace will finally open its doors to the public on 4th June 2021, having been closed since October ...

With over 3 million British Muslims currently celebrating the holy month of Ramadan, it’s ...