The Great Pagoda in Kew is opening to public in 2018. It’s a major restoration project and an exciting one. A major part of the restoration work is replacing the eighty wooden dragons which once adorned the roof corners of the Pagoda when it was built between 1761 and 1762. They were removed in 1784, probably because they had rotted following years of extremely inclement weather, the Thames had frozen over the previous year.

In 1980, the general view of English Heritage (now called Historic England) had been ‘the historical evidence for the original decorative embellishments is insufficient to enable an authentic restoration to be carried out’. They were quite right in this regard at the time. However, since 2014, members of the Curatorial team have been carrying out in-depth research on the Great Pagoda which has underpinned our conservation approach. Our work has uncovered new written and pictorial sources for the Great Pagoda which has been carried out in conjunction with careful study of the building fabric itself, including archaeological investigations and paint analysis. As a team we felt very proud of our work because when we resubmitted our plans to reinstate the dragons they came to this conclusion.

‘The Great Pagoda project has been underpinned by a wealth of scholarly research, the results of which have clearly added to the understanding of the significance of the listed building. The conservation works are most welcome and, on balance, Historic England is content that the reinstatement of the dragons will add to the aesthetic and historical value of the Pagoda, allowing viewers to gain a better understanding and appreciation of Chambers’ original design intention for the Pagoda’.

In other words, it was felt that our research was sufficient and that we had the expertise and authority to recreate the dragons. Over the course  of  two blogs we look at how curatorial research has shaped the design of the dragons in terms of their shape and colour.

The architect of the Pagoda, Sir William Chambers published engravings of the Pagoda in his book  ‘Plans and elevations of Kew’ in 1763. The design shows the dragons on the middle eight storeys of the Pagoda extending their length along the roofs. The dragons become gradually shorter as the roof tapers. They are quite large beasts, beginning at 1.8 metres at the bottom, becoming about 80cms in length at the top. It is also quite clear that these are western ‘chinoiserie’ dragons rather than Chinese dragons.

The engravings, watercolour and painting  of the Pagoda by William Marlow have even less detail.  My colleague Tom Drysdale, researched the career of Marlow and studied his sketchbook in the British Museum, confirming that Marlow had actually been to Kew and seen the Pagoda. The dragons in Marlow’s work differ significantly from the presentation engraving by Chambers.

Although the details are sketchy Marlow clearly depicts the dragon wings not in an elevated position but pushed backwards so they are more streamlined. This makes total sense, the Pagoda is nearly 50 metres high and so very exposed to high winds: if they were as upright, they would have twisted off almost immediately.

What is lacking from both these designs is detail for the face and body of the dragons. We can’t tell if the dragons were scaly, as is often the way with modern dragons, or feathery or even furry. To recreate the dragons, we needed this level of detail.

This is where our research became crucial to the project. I spent days trawling through design books at the V&A and scouring museum collections for examples of eighteenth century dragons. It became clear that there was a common ‘language’ or ‘grammar’ that was used by eighteenth century designers. Or as my colleague Dr Lee Prosser writes,

‘Dragons of the period exhibit common characteristics and rarely depart from these conventions. These include the use of lobed bodies and feathers, open wings and mouths and curled tails, which suggests strongly that Chambers’ dragons would have conformed in some measure to these types, as indeed they appear to do in the engravings and depictions’.

So the Pagoda dragons look more like Falkor in the Never-Ending Story, rather than Drogon in Game of Thrones. We worked with a sculptor to design the dragons based on our research. These designs were tested using life sized cardboard cut-outs. 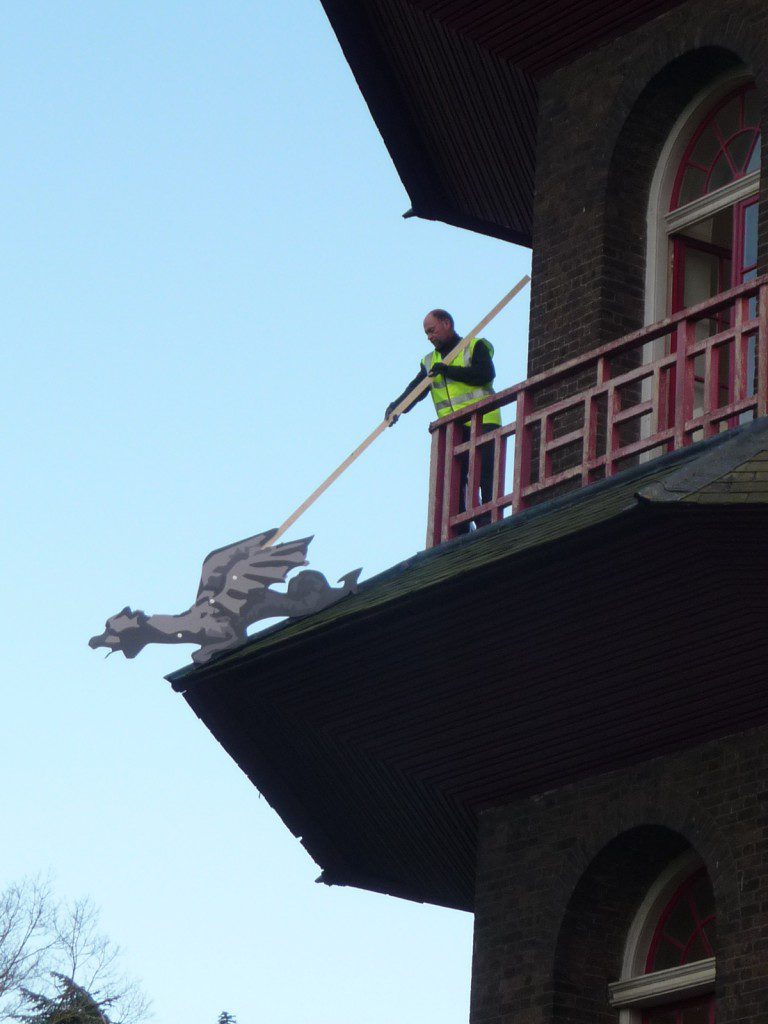 These designs formed the basis of a clay maquette, which was then passed on to our wood carver. We even tested out the wooden design by dangling a 1.4 metre dragon out of one of the windows. This was a massive effort because the wooden dragons are very heavy. 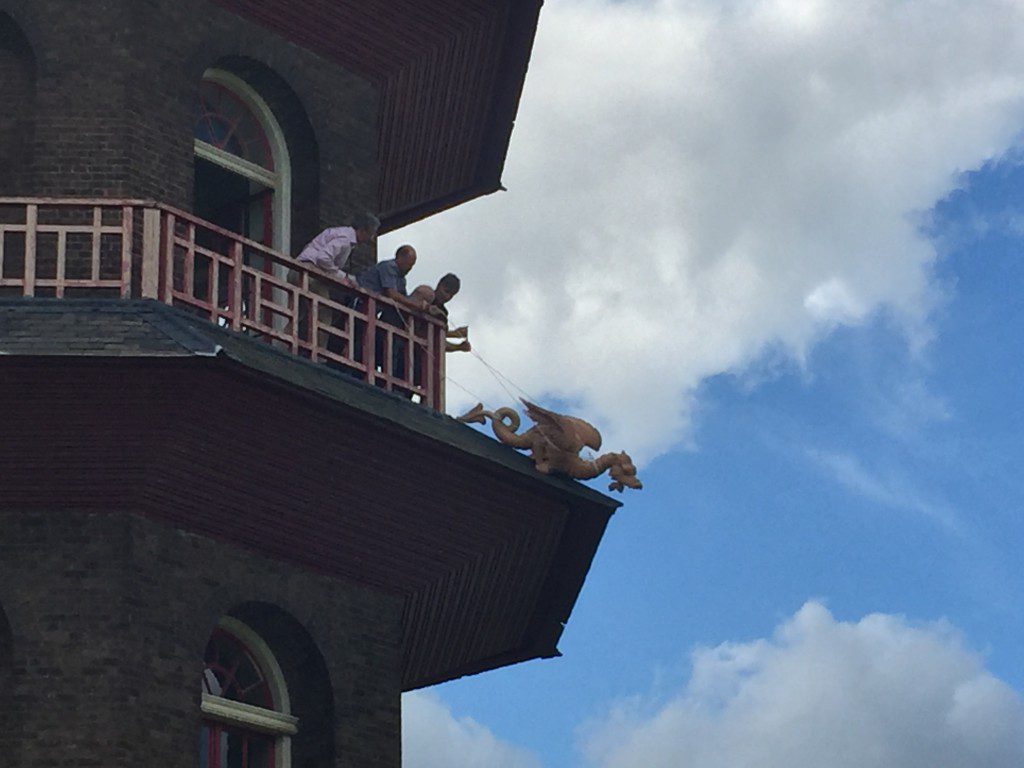 The weight of the dragons was a big problem for the design team. A softwood dragon can weigh anything between 20-40kg. In order to attach the dragons to the Pagoda’s delicate and elegant roof structure would require massive interventions into the building.

It was therefore decided that for 72 of the dragons we would use a process called Selective Laser Sintering– an advanced form of 3D printing and make the dragons out of a technical nylon copolymer material. This means that the dragons are very durable and light, so will weigh about 12 kg.

The final 8 dragons will be made of wood, because the roof structure on the lowest floor allows for a heavier dragon. Unfortunately, there is no drawing from life for which we can base our designs; in the Marlow drawings, the lowest tier is obscured. For these, we have used Chambers engravings. Therefore the wings will be upright as we have no other evidence to tell us otherwise, The engravings also tell us that the dragons were perhaps more elaborate than on the upper tiers, there is more animation to be found in the neck and tail. This is what we have tried to achieve in our design, we have completed the clay maquette and as we speak the carver is using it as a model for the wooden dragons. 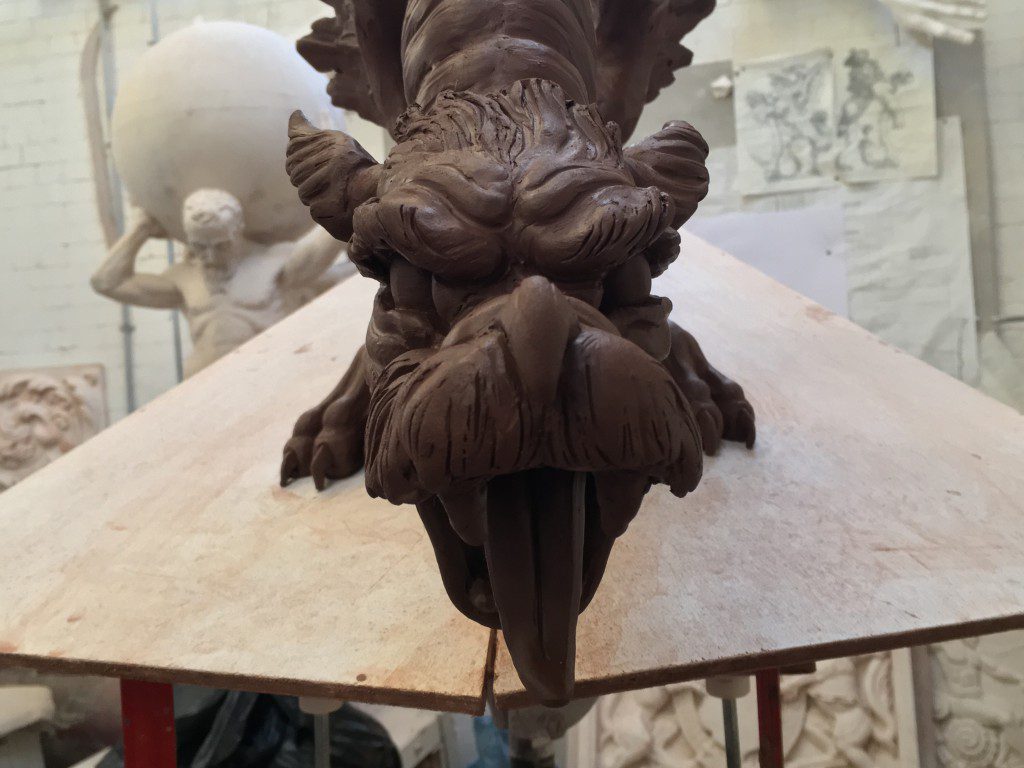 Here are some upper tier dragons in the SLS factory. 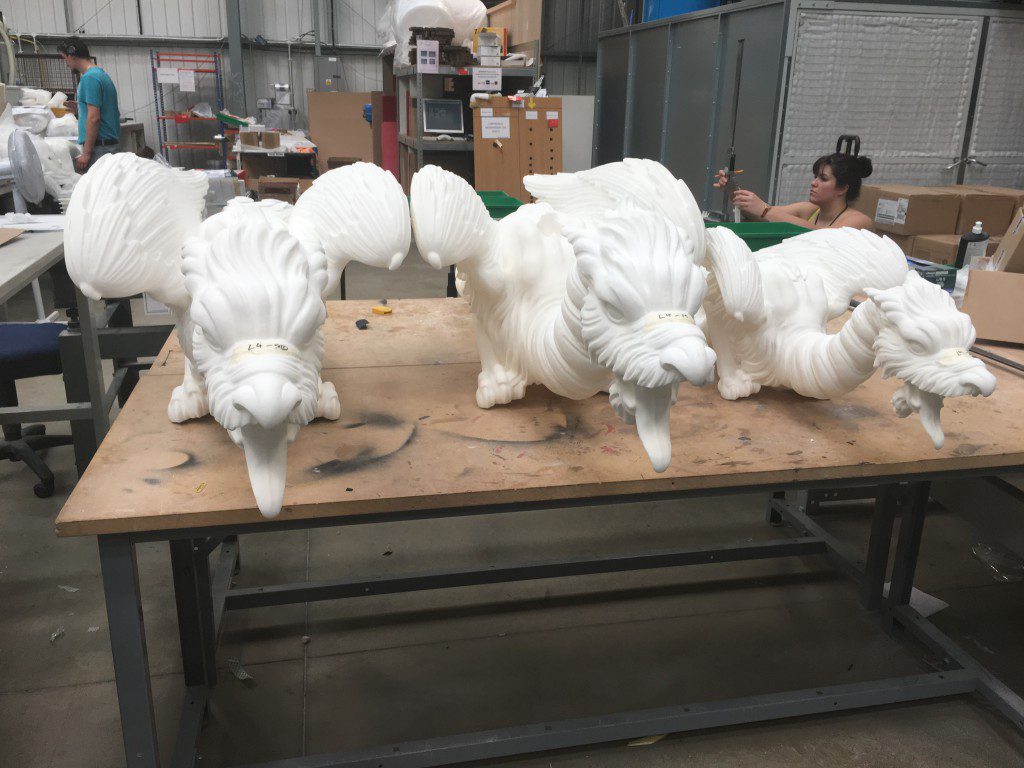 In Part Two we will explore how these will be coloured.

One thought on “Enter the Dragons: Part One Shaping the Beasts”