As conservation work continues on Queen Caroline’s State bed, Conservator Beatrice Farmer shares discoveries on the lavish silk covered mattresses, including one that appears to be an impostor. The bed is part of the Royal Collection, and can usually be found on display at Hampton Court Palace.

There are six mattresses in total on the bed. Each mattress is a large linen cushion, filled with either feathers, sheep’s wool or horse hair. A top layer of silk was added to four of these, and then a quilted pattern worked to keep the filling evenly spread. Even though the mattresses would never be seen, it was important for the Queen to have the best fabrics, worked by the most talented craftspeople. These decorative silk mattresses would have been the closest to the body, with two more structural ones below. They also have coloured decorative tufts highlighting areas of the diamond pattern in green, yellow and red silk. The tufts are only on the top side, perhaps suggesting that as well as being more decorative on the top they were also useful in differentiating between the two sides. We don’t really know the real purpose of the tufts – any theories would be gratefully received! 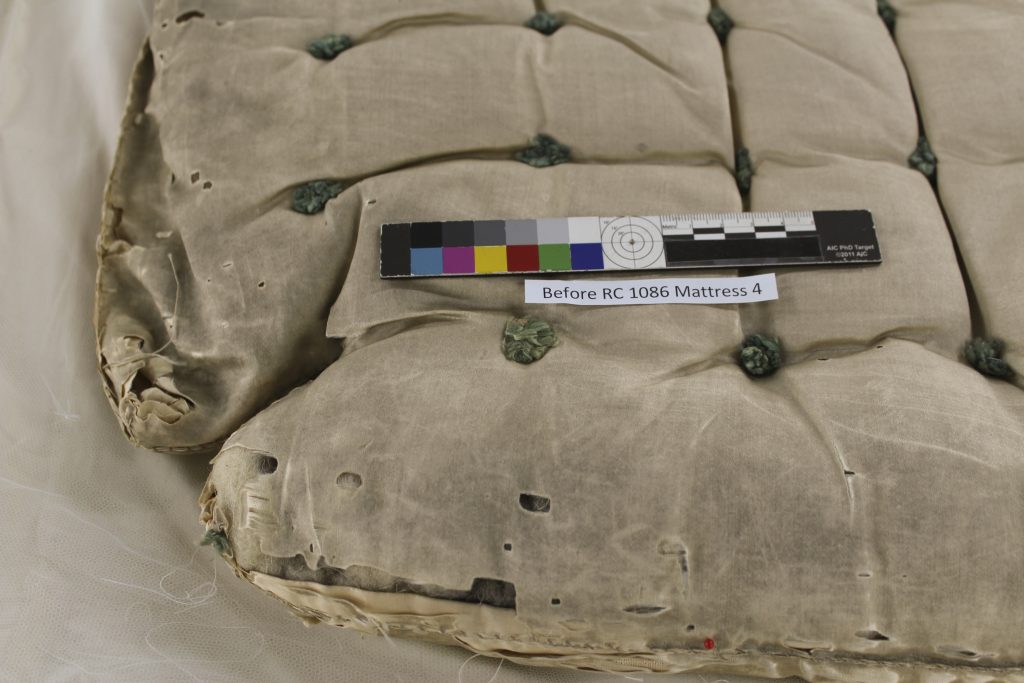 Three of the silk mattresses are, apart from the coloured tufts, almost identical. The fourth is a mysterious imposter, posing as an original but with some subtle differences. It is clearly historic due to its similar construction and patterns of degradation. However, the silk satin is slightly less fine and more of a grey tone. But the most curious part is the shaped ‘toes’ which fit around the bedposts. None of the other mattresses include this detail, which sparked our interest as to where this luxurious silk mattress came from and which Queen decided the original five mattresses weren’t enough? Presumably someone with a pea complex.

The four mattresses covered in silk have become damaged over the past 300 years. We know that in the past when fillings settled or the mattresses started looking a little tired and lumpy, they would have been returned to the upholsterers for cleaning. The woollen fillings would be removed, washed and re-carded, while the feathers would be blown with bellows to fluff them up. We take a slightly gentler approach these days for the elderly mattresses.

It’s often possible to better understand areas of damage by considering the object’s history: where it’s been, what it’s used for and who might have used it. We know at least one of these mattresses have not always been on this bed, but they are historically associated with it. By looking into these things, we can investigate how much light has hit the object, how it has been handled and where it’s been living for its 300 year life. All these different elements will impact the condition today, and therefore educate our conservation decision making. As you can see on the mattresses, the edges of them are much worse than the centre. Why is this? Could it be people brushing past the bed? Could it be exposure to light? Could it be proximity to other materials such as the headboard? Or simply a mixture of all these things and more. And looking at the well-preserved centre, they all have this distinct lump, as though two people have just stood up…a bit odd for a bed that was unlikely to have been slept in. (The bed may not have been slept in as it was used for the levee ceremony.)

Covering and carrying the mattresses

An important thing to keep an eye out for are the pests. Due to the nature of the materials, the mattresses are potentially very yummy for moths and a very luxurious home for a moth larvae. They don’t get moved very often, so they could be a nice dark place for a moth to lay her eggs. In order to minimise pest problems we keep each mattress in a case cover. They are densely woven cotton bags, custom made to the size of each mattress. The openings are sealed with Velcro to stop anything crawling in and they get checked during each audit. The case covers have proven to prevent an infestation and they are doubly useful as they incorporate pole sleeves which are used to carry the mattresses.

The mattresses are heavy and awkward to handle, and we need to access both sides. We have devised a system of sandwiching the mattresses in between two strong boards, racket strapped together, to keep them flat whilst turning. The board we have chosen is made of heat fused polypropylene which is very strong but light, and is completely inert. It takes eight conservators to lift the mattresses off the table, bring them to the floor, and turn them over.

We couldn’t separate the layers of silk outer and inner linen lining without destroying original construction and causing significant damage. So instead we worked within the constraints of the object, dealing with each layer as we got to it – conserving the silk followed by the linen. We identified three main issues we need to treat. The first was damage to the seams. Some of the seams had previously been re-stitched but were failing, causing the seam to open. This revealed the wool padding, and also put pressure on the weak silk. In some areas the wool was very flattened, so we added some new polyester wadding to support the silk. We stitched the seam closed again, using the original stitch holes where possible. We used a polyester thread, which is sufficiently strong and is recognisable as a “new” material in the future. 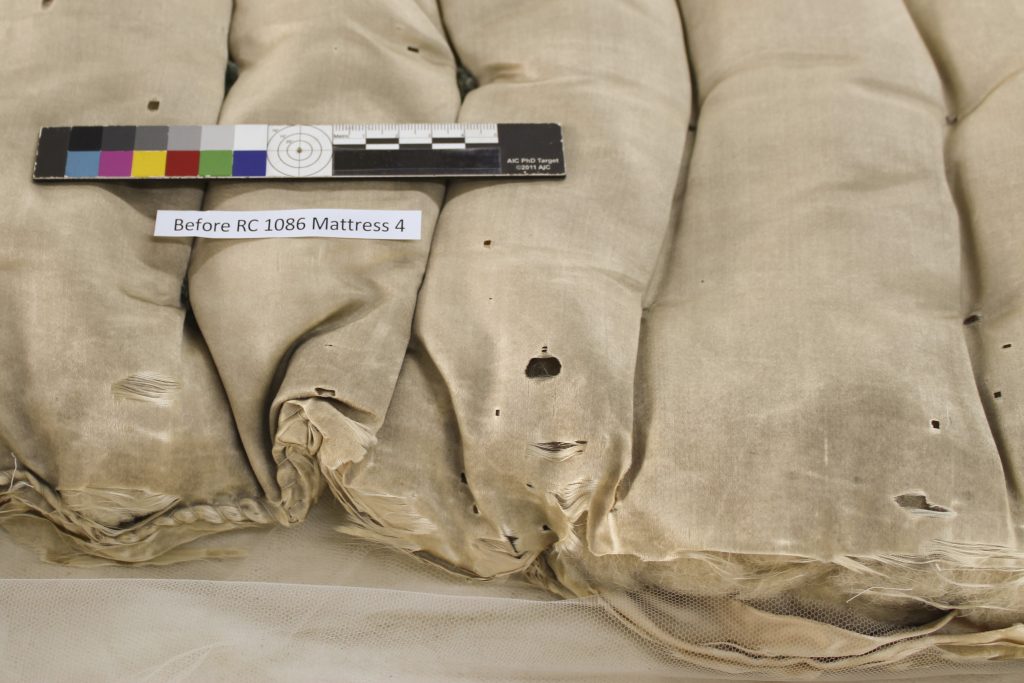 The next issue were the large areas of lost silk, leaving only the linen on view. Some of the remaining silk had broken into pieces, leaving it vulnerable to further loss. To provide a structural support to the silk, an additional layer of new silk was inserted between the original linen and silk layers. Lines of conservation stitching were worked through both this new fabric and the original. This treatment added strength to areas of weakness, and stability to areas previously vulnerable. As well as a silk support fabric underneath, we added a net layer over the silk. This minimises any future abrasion, and helps keep the silk in position – just like a textile sandwich!

The third and final aspect of the treatment was to repair the structural quilting stitches where they had broken. These stitches are decorative, but they also serve an important purpose of keeping the wool padding evenly distributed. The mattresses were misshapen where several quilting stitches had been lost in one area. If we had left these areas we would leave the nearby quilting stitches in danger of breaking due to the additional stress. When we re-stitched the quilting, we reinstated the structural integrity of the mattress by holding the wool padding in position as well as preventing further damage to the silk in the surrounding areas.

The six mattresses have now been conserved and await the return of the rest of the bed.