As supervisor of the furnishing conservation team at Historic Royal Palaces, I am leading a team of four conservators over five years to conserve one of our tallest beds, Queen Caroline’s state bed. The bed is part of the Royal Collection, and can usually be found on display at Hampton Court Palace. We are now in year three of the project; the bed has been dismantled and we are working on elements of it in our conservation studio here at Hampton Court. We will be writing regular blog posts to share some of the secrets that we uncover along the way. We will also share with you the techniques required and challenges faced when working on such a largescale bed.

The bed was made for the future George II and Queen Caroline in 1715 and displays a great change in taste and style. The bed has remained at Hampton Court for 300 years and if beds could talk it could probably write a book on the conversations it has heard over the years, including the fact that George and Caroline had a ‘successful’ marriage with seven surviving children, but the Princess had to tolerate her husband’s mistresses serving in her own bedchamber!

The wooden bedframe known as the bedstock, was made by Richard Roberts and covered with a fine bright red damask. The damask was supplied by Richard Chamberlayne and Co. and upholstered by Thomas Hill and Jeran Fletcher. Laceman William Weeks supplied the six braids that emphasise the shapes and designs throughout the bed.

The design is known as Marotesque style, named after Daniel Marot (16631752) which incorporates Baroque elements such as a broken cornice and elaborate ‘cups’. It has 21 items of associated furniture: 18, stools, two armchairs and a firescreen. It must have made quite a collection.

As with all the six state beds at Hampton Court Palace this bed is condition checked and cleaned every three years. Over the past 300 years the bed has received much care and attention, with every component part receiving some level of treatment, including significant repairs dating back to the early 1900’s. Full conservation was in progress in the 1980s but this was halted in 1986 when the Hampton Court fire tore through the King’s apartments and devastated the King’s Throne Canopy. Conservation of the Throne canopy took precedence and Caroline’s was returned to the bedchamber where it has remained on display for the last 33 years.

In the early 2000s preparation began to resume the conservation work. As a team we discussed what had been done in the past and started planning the future steps to enable the bed to be taken down and all the 41 separate components treated. The particular challenge with this bed, given the variety of treatment that it has received, is to give a consistent and cohesive presentation whilst preserving as much of the original as possible. We work on the basis that our conservation will last for 50 years on open display and we record everything that we do to inform our successors. 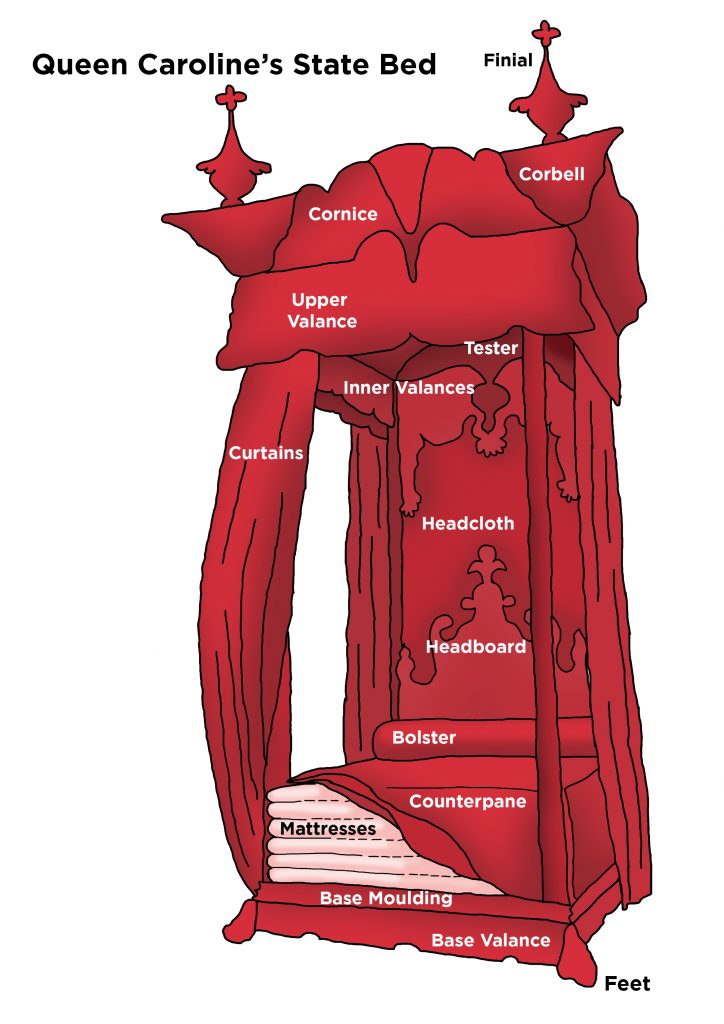 As conservators we have the rare opportunity to have access to every part of the bed and get to see and treat areas undiscovered by many. We would like to share our discoveries with you and allow you to imagine the whys and wherefores. As we peel back the layers and reveal the past we will share with you the problems posed and the solutions we devise before resealing the secrets for future generations to find. We will take you on a journey from finial to foot and when the bed returns to the bedchamber maybe you will come and see it for yourself.